Where highways 61 and 49 meet lies a small town nestled among great expanses of cotton fields, where tractor motors chug and historic brick buildings stand tall. Here, rich history and culture demand attention and seep into every detail of the town’s being. In Clarksdale, Mississippi, BBQ is fine cuisine, accents are thick, and blues are king.

Most weeks of the year, the small community of Clarksdale is a quiet, often overlooked, town. However, one week every April, tourists and townies flock by the hundreds to the historic downtown for an authentic taste of the Mississippi Delta. The Juke Joint Festival celebrates Clarksdale’s rich blues history and embodies the old southern spirit as musicians of all ages line the streets and fill the alleys with the melodic sounds of the blues.

“I moved here as a blues fan with a marketing background. My plan was to bring back downtown and bring back this area of live music,”said  Juke Joint Festival founder Roger Stolle standing under a blue festival tent as a blues singer crooned in the background. “Well, we came up with this concept of a half-blues-festival half-small-town-fair- all about the Delta event.”

Stolle directly equates the growth of the town and the addition of several small businesses to the success of the festival. The town is now home to several international transplants, “when they tell people why they moved here, they always mention the Juke Joint Festival. They came and were like, ‘Wow this place is awesome’ and they kept coming back.” He increased his volume as the nearby sound of a harmonica continued, “It’s directly led to the revitalization of Clarksdale, Mississippi.”

Speaking of the tourists who travel from as many as 50 different states and 28 foreign countries Stolle added, “Oh, they love it! Because they get to hang out with real southerners and experience southern hospitality and all of our local characters- I think we have a lot of local characters-it’s a whole cultural and musical exchange that happens.”

The city of Clarksdale, largely under Stolle’s leadership, has managed to create a “creative economy”, one that capitalizes on their community’s rich culture and history by bottling up and selling a cultural experience to curious tourists. Clarksdale, a small town with little to no industry, has managed to kick start its economy and put itself on the map by marketing its historic backbone.

People travel from all over to see the place where the blues began and to experience the Mississippi Delta, “The blues scene is a hot one here and growing all the time. For a town of 18,000 people we have a tremendous amount of tourists. You can drive into the street right now and see tourists walking around taking pictures, every minute of everyday now,” commented Mayor Bill Luckett, a lifelong Clarksdale resident and part-owner of Ground Zero Blues Club . “On any given day you can sit on the porch at [the club] and say hello to people from all over the world”

Luckett reflected on the growing number of older, famous rock musicians who have returned to Clarksdale with their children as a sort of pilgrimage to show the younger generation, “This is where it all started, this is where the music comes from, this is ground zero for blues.”

“I’m very happy with all the work Mr. Stolle and them have dedicated, the time they’ve put in to make it the biggest festival we have,” the Mayor remarked in his slow, southern drawl.

Recognizing the town still has plenty of room to grow, Stolle added, “If you come here on a random Tuesday in January- yeah, it’s pretty quiet- it’s hard to tell, are they going down or coming up? But then you hear about all the work being done on buildings, and you see all these people coming in and you think, ‘Wow, cultural tourism really can save a downtown,'” He adjusted his dark framed glasses and continued, “We have a lot of things to work on in general, but blues is doing its part and cultural tourism is doing its part.” 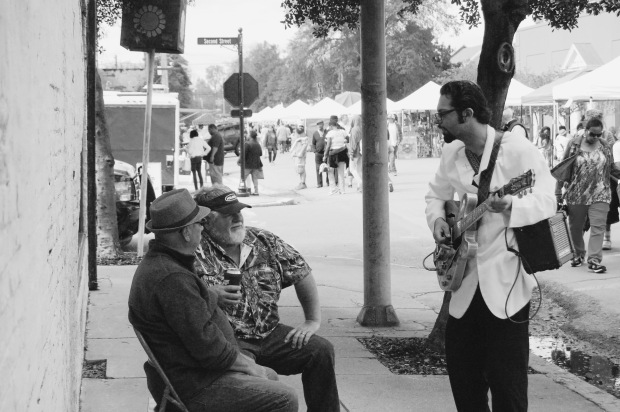 But live music at a once yearly festival isn’t the only element of this cultural economy; the town’s vast musical history has done its part to bring in music fans during the other 51 weeks of the year .

Scott Barretta, a writer and researcher for the Mississippi Blues Trail and former editor of Living Blues magazine saw the potential of this cultural market from the beginning, “I came to Mississippi in 1999 and almost immediately became involved in informal discussions with people involved with blues across the state on how we could try to increase cultural tourism. A federally-funded study had found that there wasn’t much potential for blues tourism… but those of us who worked closely with blues felt that they had misunderstood the market.”

The Mississippi Blues Trail cites the journey of the blues by marking significant historical sights, “We saw the Trail as having two rationales — to educate and document cultural heritage, and economic growth, providing an infrastructure of sorts for blues tourism around the state,” Barretta explained. Today Clarksdale (and the surrounding Coahoma County area) have thirteen markers that identify significant pieces of blues history that draw music fans from around the globe. 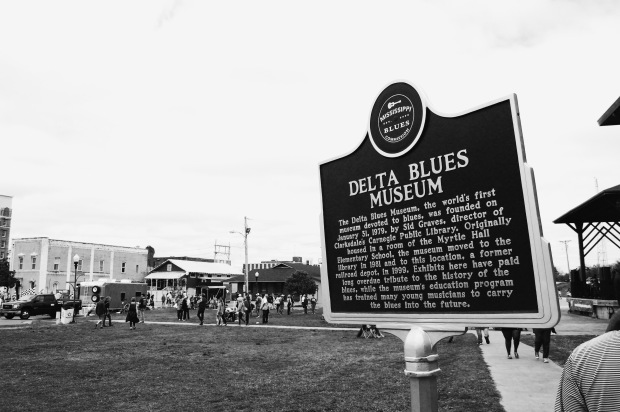 “Blues tourism has certainly been a benefit to Clarksdale economically… the advertisement of Mississippi as a place rich in culture makes it more attractive to potential investors,” Barretta expanded.

“It never gets old,” said Clarksdale native Kappi Allen who now serves as the Executive Director of Clarksdale’s Tourism Board.

Allen donned a green “Juke Joint Festival 2016 Volunteer” t-shirt, smiled gregariously and spoke passionately about her town,”We have music 7 nights a week, you can always find music somewhere.There used to be a tourist season, but now we see them 365 days a year. And they’re easy to spot because we know everyone here.” She paused to wave to a passerby and continued,”People are constantly approaching [Roger] to play Clarksdale”. “When this stops being amazing to me, I need to find a new job. I don’t ever want it to not be amazing to have guests here.”