Southerners love their fried chicken and barbecue, but what about curry and pad see aew? For years, locals have flocked to Oxford’s two thai restaurants, experiencing the tantalizing spice of thai cuisine. However one local superstar, Rice and Spice located on Jackson Avenue, has dominated this specialty Asian cuisine scene in Oxford, until now.

As of February 2016, two new thai restauranteurs have entered into the race to make the best thai dishes in Oxford. Aloha Thai and Zaap Thai Kitchen are the new guys in town.

Zee, owner of Aloha, worked as a chef for Oxford favorite, Rice and Spice, for over a year before leaving to pioneer his Hawaiian-Thai restaurant on West Jackson Avenue. 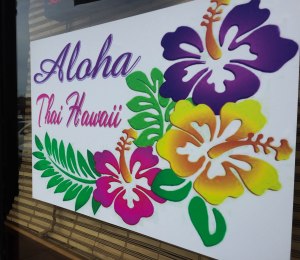 “A lot of customers, they wait for a seat for an hour, two hours — and I was thinking, why? Why don’t we have more for the customers?” Zee added, speaking of his former restaurant. It was his frustration and confusion with this enigma that inspired him to branch out on his own.

Thai born Zee spent over 15 years working in Hawaii, it was there that he adapted his style of cooking to incorporate the two cultures.

“We bring the customers more choices, that’s why we do Thai and Hawaiian mixed together.” Aloha manager Pen added, “Hawaiian food is like American food mixed with Asian.”

Pen explains how their fusion of flavors is the perfect combination for friends eating together with different tastes, at Aloha, “everyone can have what they want.”

The restaurant offers a variety of side dishes that incorporate flavors from both Thailand and Hawaii, “we have white rice, macaroni salad, french fries, and mashed potatoes,” Pen added. They’ve even aded a repertoire of fried delicacies to satisfy their southern customers. 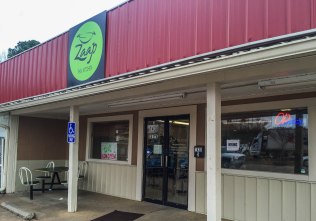 “I thought about it for a long time because I like to cook,” admitted Palawan. Before opening Zaap’s doors on February 25, Palawan had several years cooking in Oxford, learning the ins and outs of different culinary styles. Palawan’s resume includes cooking on the famous Oxford square, at Big Bad Breakfast, and, most recently with the Aramark company working on the campus of Ole Miss.

“I like to do curry, my customers love the curry. I try to bring something new. Because I’ve worked with a lot– I do different kinds of food like Korean food, Chinese, Vietnamese, so I tried to make it special,” she added.

Palawan credits her Thai family for teaching her how to cook her famous Thai dishes. That paired with her seven years of experience in the restaurant business have helped her formulate the distinct style of cooking she utilizes at Zaap.

When asked about how she plans to set herself apart from her growing competition, Palawan states, “I try to add something different. We do a bành mi and pho” two dishes that are a fusion of different Asian countries.

“Even one week I can tell what is popular. We have panang curry very popular and we have been pho–pho that is Vietnam–very popular too. The other thing is fried rice, because around here fried rice is good. The most we sell is panang curry.”

Palawan is hopeful that her location on the north end of town and her fusion of cultural flavors will help set her apart from her growing competition.

But how does this influx of Thai talent influence the already thriving market in Oxford?  Mue Thamutok, son of Rice and Spice owners and part-time employee, weighs in with his thoughts, “I think we’ve had so much success because there was no Thai restaurant in Oxford when we started. We decided to keep it a family restaurant and want everybody to feel like a family they come here,” he added, “there is no other like Rice and Spice.” Thamutok credits their success to the authenticity of their flavors cooked up by their talented chefs, all of whom are native Thai.

Mue’s father, Sathit Thamutok the owner and manager, equates their success to “a combination of factors: location, quality and consistency of food, great service, and unorthodox marketing.” He added, “we don’t know if new Thai restaurants in town will impact our business or not, and we don’t care much about competitors… we will stay true.”

detail shots: Aloha, close up of food on tables

Palawan, making food in the kitchen