Every year in the month of February, red and pink balloons and heart shaped decor flood shops, restaurants, and grocery stores. Valentine’s Day can mean a myriad of different things for different people: perhaps it’s an opportunity to tell that special guy or gal how you feel about them, perhaps it’s just another reservation at an overpriced restaurant; maybe, for singles, it’s a day of loneliness, or simply just an excuse to buy half-priced chocolate. Whatever it means to you, there is irrefutable truth that Valentine’s Day marks one of the highest consumer periods of the year. In the tiny hamlet of Oxford, Mississippi, this fact reigns true.

“We were open from 8:00a.m. to 7:00p.m. on Saturday, and we’re usually only opened 8:00a.m. to 5:30p.m.,” Oxford Floral employee, Frannie Thompson reminisced. “Every person who works there was on duty. Every hour, one of the college girls was on ‘phone duty’ because the phone was ringing so much and we couldn’t answer because we were helping so many customers in the store.”

Oxford Floral, Oxford’s premier florist and gift shop located directly off the square, began preparing for the big holiday in advance. The week before the chaos began, the shop was bursting with hues of pinks and reds, specialty gifts, and tasty Valentine’s treats.

February is undoubtedly one of Oxford Floral’s busiest times of the year and has been since their founding in 1924. Ann Overton Waller, a junior at Ole Miss, remembers her mother telling of her memories working at the family-owned floral shop, memories of she and her colleagues sleeping in the store room the days before Valentine’s hit, overwhelmed with orders to fill.

But as we all know, Valentine’s Day isn’t just about chocolates and candy, it’s also a holiday known for candlelit dinners set for two. Oxford was buzzing on Valentine’s weekend, and many of the town’s famous local spots were bursting with happy couples. Several spots offered specialty menus and romantic dishes for locals to enjoy with their sweeties on both Saturday and Sunday.

Amy Cole, an Oxford resident, recounted how she and her husband spent their Valentine’s Day, “We went to Lenora’s on Valentine’s. We sat in the back room which I love! It feels like you’re escaping Oxford for a bit! They offered a four-course meal special and it was delicious! The second course was lobster ravioli which was amazing and for dessert we had strawberry chocolate baked Alaska, it was divine!”

Melody Abboud, another Oxford resident echoed the comments of her friend, Amy Cole: “We actually stayed in and cooked on Sunday night (the 14th), but the night before we also went to Lenora’s.” Abboud commented how she appreciated the pre-fixe menu and the pre-fixe price, which was $40 for a fabulous four-course romantic spread; however, she admits her favorite part of the meal was not the dessert itself, but its plating, read hearts drawn on the plate in sauce.

The effects of this important holiday were not only seen in preparation for the big day, but also in the days following. The day after Valentine’s, prices for red tin foil wrapped chocolate hearts are slashed in half or even more. The Walgreens on University Avenue  offered 50% off all Valentine sweets and gifts, and the CVS Pharmacy on Jackson Avenue sold their candy treats “buy one get one free”. 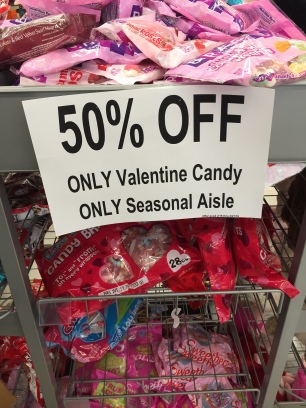 But next year, you better act fast, just two days after the 14th the once stocked shelves at convenience stores were nearly completely vacant.